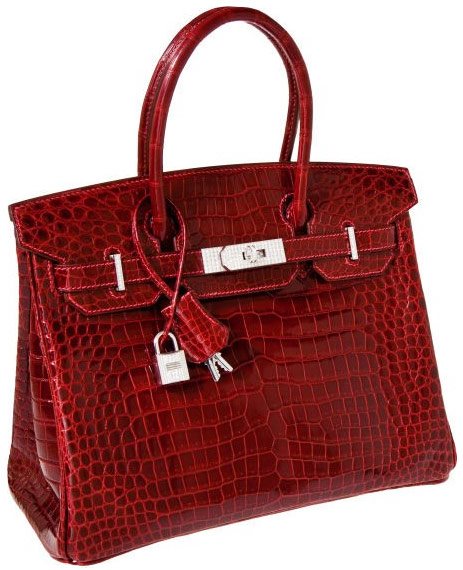 If you were to ask any handbag lover what the most expensive handbag to ever sell at auction was, I’m pretty sure that we’d all guess the same thing: an Hermes Crocodile Birkin with White Gold & Diamond Hardware. It just makes sense; not only are Hermes bags (and Birkins in particular) notorious for holding their value and doing well at resale, but a crocodile Birkin with diamond-encrusted hardware is one of the most elusive and expensive collector’s items in the world.

When a friend alerted me a few weeks ago that a Dallas auction house was set to put a group of rare Hermes bags on the auction block, I told her than the estimated $80,000 price for the “Hermes Exceptional Collection Shiny Rouge H Porosus Crocodile 30cm Birkin Bag with Solid 18K White Gold & Diamond Hardware” (as the auction house called it) you see above sounded a bit low; I guessed that it would go in the $100,000+ range. That being said, even I am a bit shocked at the price this bag actually sold for earlier this week…

To an anonymous bidder, of course. Women’s Wear Daily reports that this is the most expensive bag ever sold at auction, which is almost comforting – if this were instead a run-of-the-mill price, I’d be concerned. Although because this bag isn’t special beyond the obvious ways – it wasn’t owned by a celebrity, for example – it’s possible that these are merely the numbers we’re going to be seeing for this design in sought-after colors from here on out. Or maybe there’s just an heiress out there who couldn’t restrain herself from this particular shade of red?

its an extremely beautiful bag!!! but out of my league!!!! lol

I am a handbag enthusiast and this is an interesting fact but that is ridiculously expensive.

So expensive! but so pretty!
Will never have one but dreaming is alloud!!

All of my friends and family think I am crazy for purchasing the designer bags that I do….I think they would have me committed if I bought this, oh, and I would also be divorced. I love nice things and believe you get what you pay for, but at some point this is complete over indulgence. (but it is beautiful)

i agree with you, Sandra. my husband allows me to splurge on shoes, clothes and purses but not to the extent of us losing the roof over our heads or not even able to afford a loaf of bread or travel. it’s true what they say, once you’ve got a designer purse, you’ll want another one and won’t settle for a fake. i haven’t own a fake yet and God forbid, i won’t ever….i’d rather save up on my euros for a real designer bag than strut my way with a fake or a knock-off.

Not the Birkin IÂ´d go to if I could afford one. I canÂ´t deny its a beautiful bag, but thatÂ´s a lot of money, for sure

It’s a beautiful bag…but I would never spend that much money on a bag even if I was a billionaire.

And there are no diamonds!?

I saw this bag in whatever the Hermes color is for “fire-engine red”, gold, diamonds and all in the Hermes HQ in Paris, in May 2009. It retailed for around $250,000. An auction price of 203K sounds right. Very pretty. I hope it went to a good home. My guess the buyer has a bodyguard.