Selena Gomez’s Shoe Game Has Been Pushing the Envelope Lately 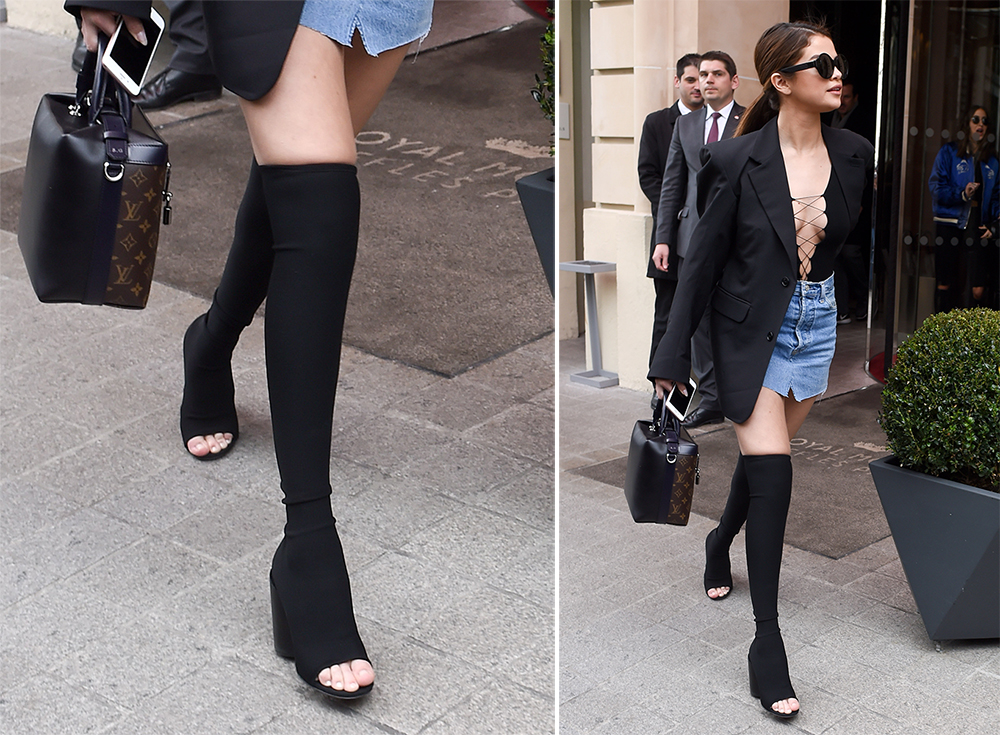 Earlier this week, Selena Gomez quietly became the most popular person on Instagram, surpassing even her BFF Taylor Swift. Once the media latched on to this factoid, however, it was much less quiet. In fact, Selena has actually gained an additional 2 million followers since the news broke, leaving her ex, Justin Bieber, lagging almost 10 million followers behind.

The fact that Selena has 70 million followers and the fact that she makes excellent fashion choices are not unrelated. What she wears greatly factors into her ‘grams, and she is something of a designer darling. If you can’t name a single Selena Gomez pop song, or you’ve never actually seen Spring Breakers, you are probably still keenly aware that for some reason, Selena deserves our attention, and we should care about what she does. Or at least, what she wears.

Here’s Selena, leaving BBC Radio One studios in London wearing a pair of bicolor Céline Slingback Pumps, which I have never even seen on a pair of celebrity feet before. Chunky heels and treasured 70’s styles like clogs and mules are terribly IN right now, so Selena knows what she’s doing, I guess. 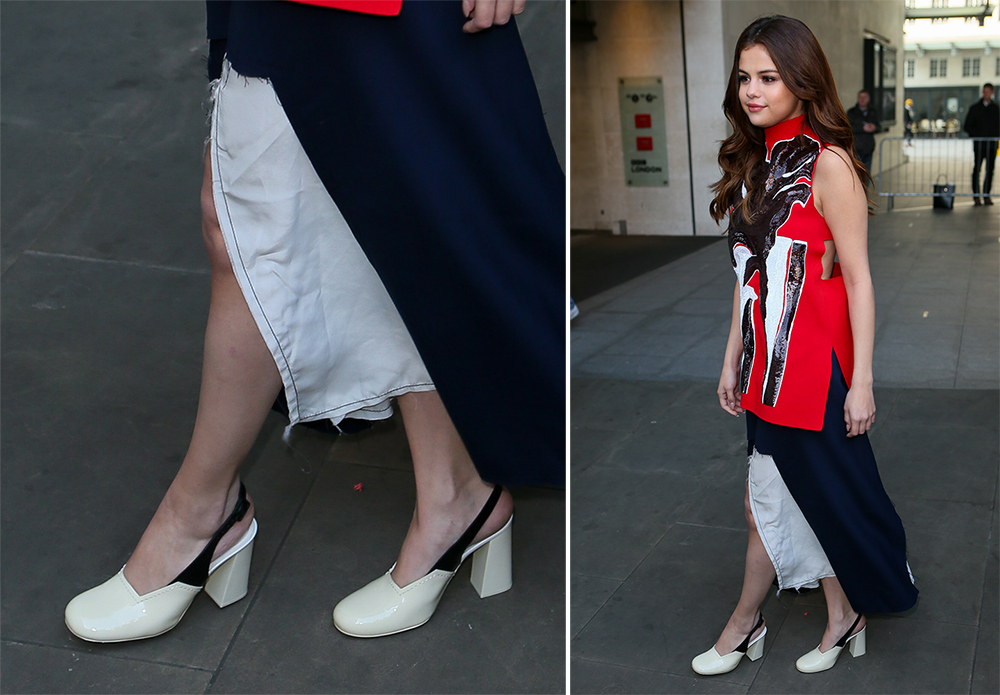 Creatures of the Wind Kira Sandals
$725 via Nordstrom

Here she is heading to her performance at the Victoria’s Secret Fashion Show in a strappy pair of black and white sandals from Creatures of the Wind. Pay attention to Selena’s use of the color black in every outfit. 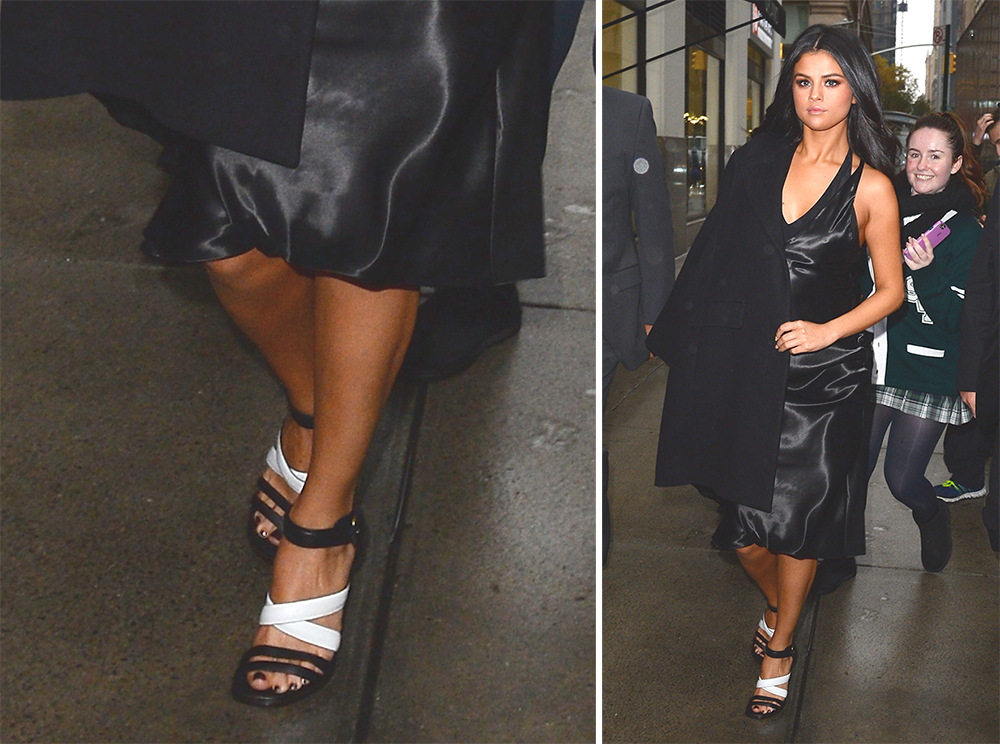 Selena wore these silver Dior pumps and a sublimely simple LBD to a photo shoot after the Billboard Women in Music event in NYC last December. 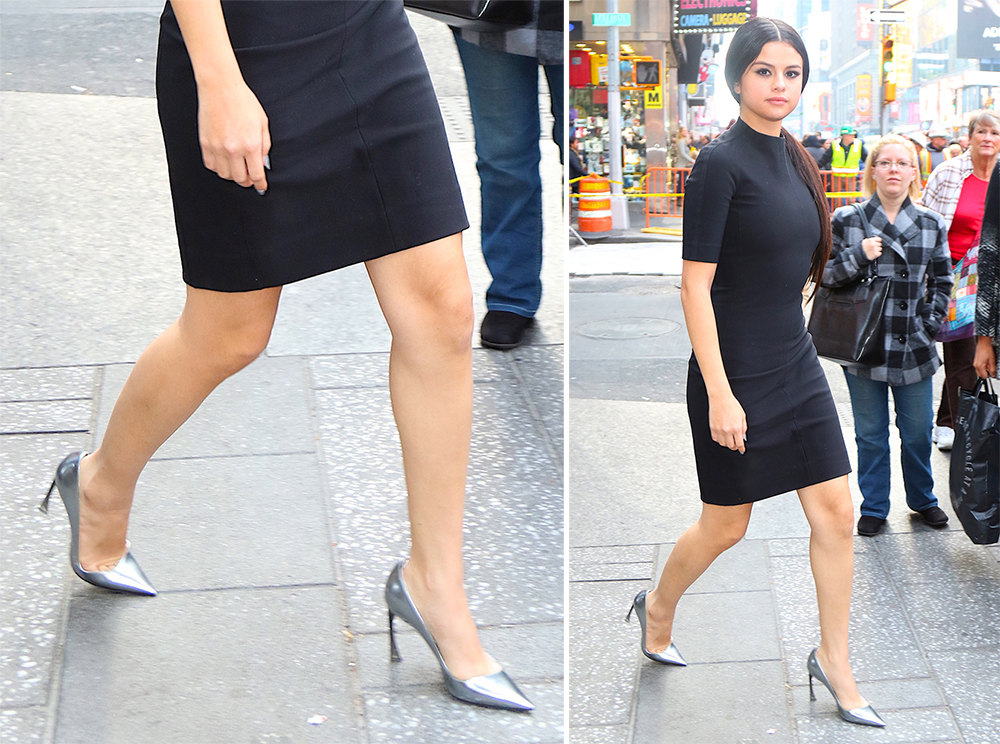 It always greatly amuses me when celebs are dressed to the nines for a radio appearance. (Yes, I know some stations do a special telecast, but still.) Selena wore these pristine white Francesco Russos to do some radio promo in Paris for her last album. 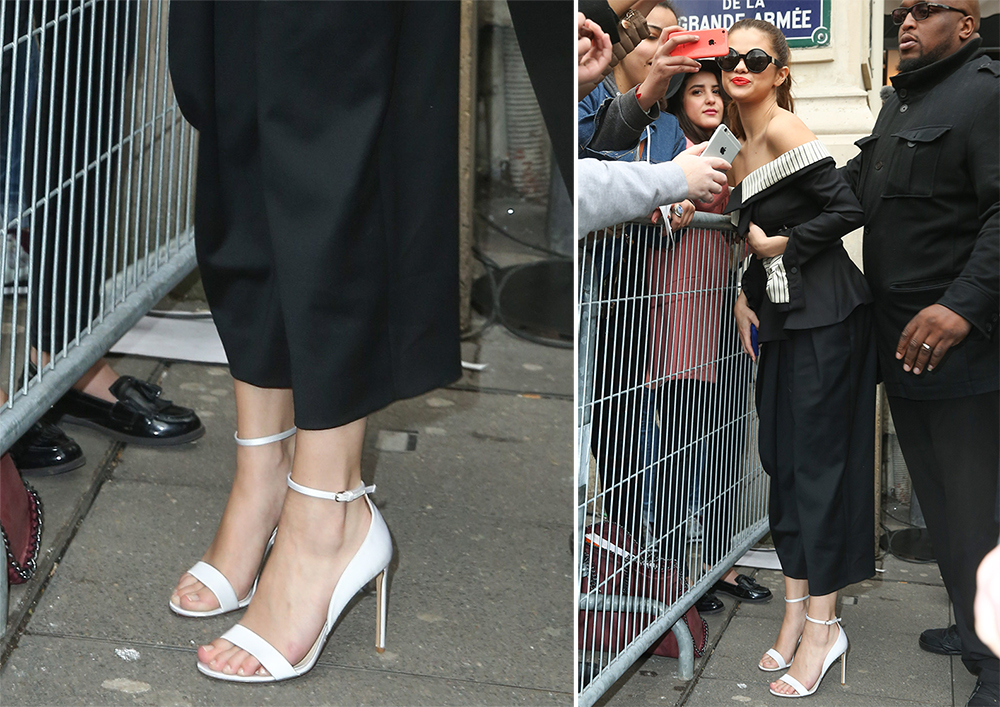 Here’s what Selena wore on her very first day in attendance at Paris Fashion Week Fall 2016. Those gorgeous, open-toed Givenchy boots make her petite body look like it is 75% legs. As you might have noticed, Selena seems to have a slight aversion to carrying her own handbags, but here she’s gotten hold of a super exclusive new tote from Louis Vuitton‘s most recent runway collection.

These unusual Jenni Kayne sandals are well on their way to being just as popular with celebs as Kayne’s d’Orsay Flats. Selena recently donned this all black, yet strangely spring-appropriate ensemble while ambling around NYC. 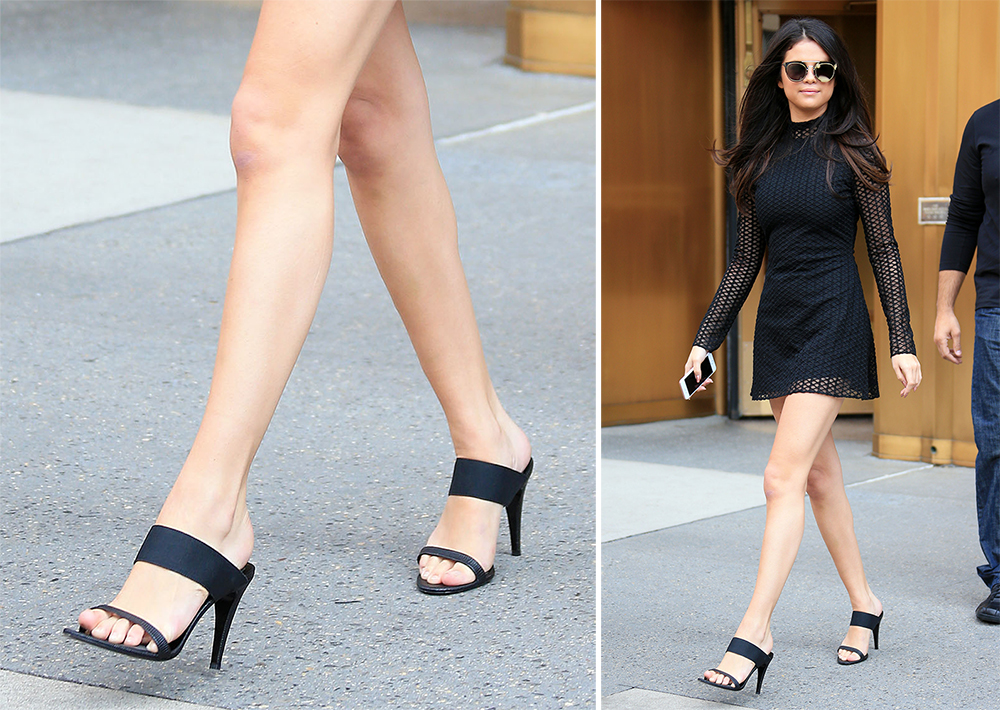 Selena is a particular favorite of Louis Vuitton’s, and she always gets a front-row seat at the brand’s runway shows. On the occasion of the Louis Vuitton Fall 2016 show, she wore a crisp, white button-up and a denim skirt paired with snakeskin, oxford-style Louis Vuittons. It’s a strangely all-American look for Paris Fashion Week, even with the snakeskin. 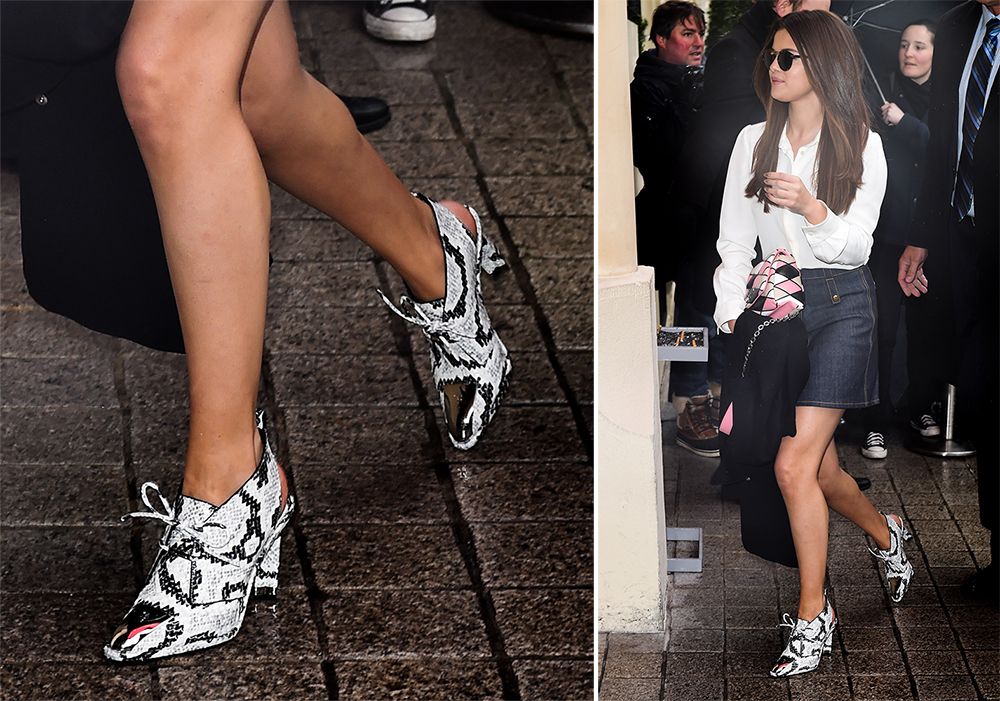 Finally, here’s Selena leaving an appearance on Jimmy Fallon in a pair of open-toed Stella McCartney ankle boots, paired with yet another LBD. Unlike the many daytime ensembles we’ve seen her in, this low-cut, high-slight, slightly flashy look works great for late night. 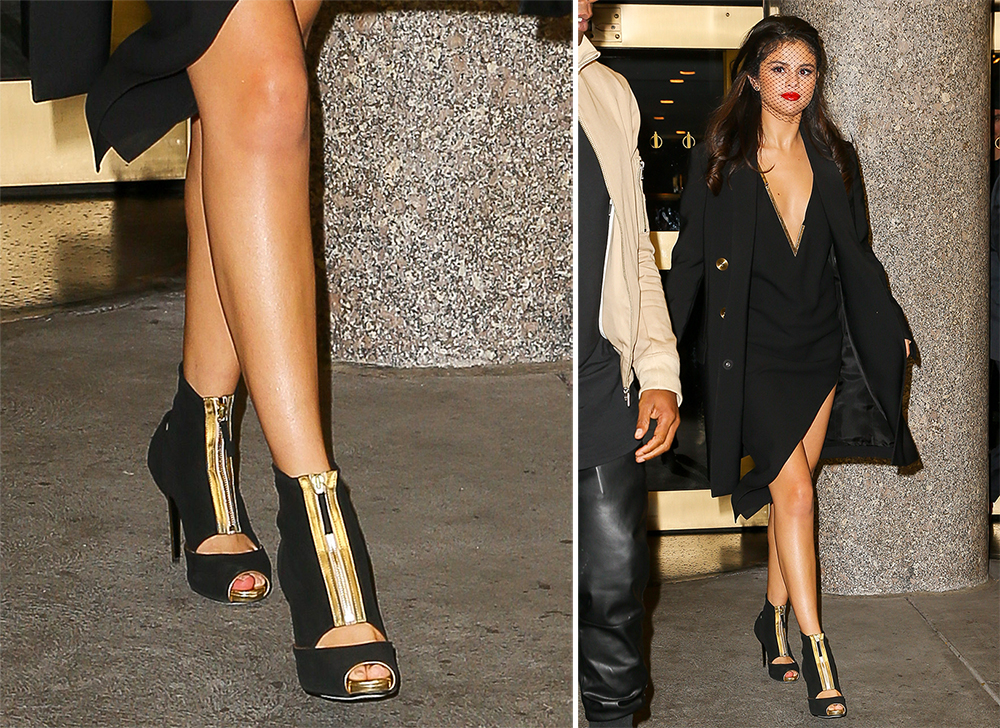 Agree. Poor thing looks like she is trying way to hard

It’s funny that you say that because Kim Kardashian is considerably shorter than Selena!

Oops. Sorry. I read your comment backwards, if that makes any sense.

Kim Kardashian is about 5’2″, actually. I was pretty surprised to see her in reality and realize that she is not a millimeter taller than I am. She’s tiny. If Selena is actually shorter than Kim, she must barely top five feet.

So glad my self worth isn’t measured by number of Instagram followers.
I don’t even have an account (at least I think i don’t…I might have signed up…)

Love Selena’s JK sandals ! Found amazing stuff on this site too ! I do love handbags more than shoes most days !!!!
http://34d45gp8w2ev6z1qw5j731e7pq.hop.clickbank.net/

Selena Gomez seems like a sweet girl. Sometimes I feel badly for her because she really seems to be trying hard to have a more grown-up look. She has this grown baby look that is hard to get by no matter how much you try to sex her up.

I’m not sure I buy Ms Gomez – who does indeed seem (look?) sweet enough – as a fashion pate until she loses those somewhat passé pop teen dream pop tresses.

I think she looks really cute & in some of the outfits, a chic young woman.

I just can’t take her seriously – I love her style but she just looks soooo young. Taylor Swift has managed to grow out of that and look grown up but Selena – sheesh, my 11 year old looks more mature.

I do not like those Givenchy boots at all